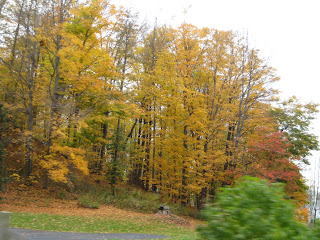 Before I start this post, there's something I forgot to tell you about our train trip. Namely, not once--not even one time!--did I have to whip out my driver's licence. And remember, we traveled by train from New York to Nevada and back again(!) And nobody ever searched my suitcase or made me remove my shoes or twirl around with hands upraised or any other nonsense which, well, makes me hate flying. It was as though Amtrak never even heard of terrorism which, alas, made me feel as though we were traveling back in the 1930's, ever so far from 2010.

Anyway, also while on the train, we swished past some backyards which were heaped full of rusty junk. Old cars, appliances, boxes, bicycles, pans, glass, etc. And always I would wrinkle my nose and think, "Good grief. How can they stand to have a yard like that??"

But then we arrived home and discovered the show, American Pickers.

Wow. That show is my current favorite-of-all-time (hopefully I won't lose you because I said that) and the most incredible thing? Now when Tom and I drive past the very occasional wildly-cluttered-with-rusty-stuff yard, both of us point and exclaim, "Ooooh! See that? Can you imagine what treasures those people must have? See their barns? Don't you wish we could look around inside them and buy some stuff and then sell it? Oh, that would be fun."

All because of a tv show, Tom and I now view messy yards in a whole new light. And because of the people who Mike and Frank have introduced us to on American Pickers, we have compassion for those types of collectors and yes, hoarders, as well. The people we've met on American Pickers are some of the sweetest, old-fashioned folks ever.

What a lesson! We've been reminded to look past the What and to see the Why--and the Person--instead. To view the Who, beyond the Do. To keep in mind that the heart is in the deepest part of a person and cannot be totally seen and understood just by seeing his or her outsides. Nor by viewing his or her backyard, either.

What matters is how we see what we see.

What really matters is compassion.

And yes, I wrote that first paragraph because of the new airline search rules which go into effect today. Gah. As if I wasn't already feeling violated enough the last time I flew! :(
Posted by Debra at 7:42 AM

Email ThisBlogThis!Share to TwitterShare to FacebookShare to Pinterest
Labels: Paths To Joy

Debra~ Oh how very true this post is. Thanks so much for the reminder.
Have a great day,
Lisa :o)

We can all use a little reminding from time to time. I just got back from a cruise and all they seemed to want to scan was my phone & camera. I could have had a gun in my pocket. We delivered a copier to a prison yesterday and they never questioned us about the cell phone on my hip or if I had any weapons. I did have a knife that I use every day opening boxes. I guess it depends where you are and who you in front of.