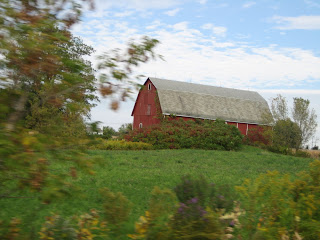 A couple days after we returned from our vacation we were sitting peacefully in our living room and then the phone rang. It was Tom's former boss.

And wow. He said they'd made the cut too deep, laid off too many men. So he went around the plant and, one at a time, he took each guy aside and asked, "If we could hire back any of the four guys we let go, who would you want us to hire back?"

It was unanimous. They each said, "Tom."

Oh my. You can imagine how terrific that made Tom feel. All of them wanted him back!

And now, that is totally not to slight anyone because here is the real miracle: as Tom said, himself, he is the one guy of those downsized who is least able to physically do the work required. The other three were younger and did not have his physical limitations.

So his former boss said he'd set up a meeting with the powers-that-be and would do everything he could to make Tom's return to the plant, happen. The meeting was finally held yesterday and--if this was a work of fiction--I'd tell you that hooray! Tom was hired back.

But he wasn't. Tom's former boss fought hard for him (and feels dreadful now), but the powers-that-be said, "Not right now. Maybe in two or four months."

Oh well. We knew all along there was that possibility. But you know? Just that first phone call has also, all along, comforted us, encouraged us and let us know clearly that God is making Himself obvious on our behalf. And that's the best news there could ever be.

Way back when I was in my 20's I used to totally fear praying for God's will to be done in my life. I thought His will would be unfun, unadventurous and unfair. My will, my ideas, sounded way more exciting and a better fit for me (me, me, me,), personally.

Good grief! What kind of prideful ignorance was that?

Well, I've grown up a lot since then (thank-goodness) and now I so want God's will to be done in Tom's and my life. His will--I have seen--is exciting and filled with adventure and opportunities to trust and grow and become. No way can I become what God's planned all along if I'm always following my own will.

So let the Unemployed Adventure Days of Our Lives officially begin! There will, I'm certain, be plenty to write about here in the months to come.
Posted by Debra at 7:40 AM

What an uplift those co-workers gave your hubby.
A testiment to his work ethics.
They did not go unnoticed.:0)

That was an exciting call. Sorry that it did not work out...yet. But I think it is awesome that everyone there wanted Tom back. God is watching out for you guys and I just think it is awesome when He does things in our lives that make it SO obvious that he is at work!
God bless and Have a great day!
Lisa :O)

Just stay focused and keep your priorities on God and He will surely do a mighty work in both your lives. It is times like this that He does His best work. Give Him all the praise and glory.
Odie

His former boss and co-workers were wonderful. Yes, it should make Tom feel good.

Sure it would have been great, if it all worked out, this time. But that "maybe in 2 or 4 months" is still more than most laid-off people have.

And I know, that sounds 'Polly-anna-ish.' Which isn't helpful. But..... My best wishes to you both. My very good friend has been out of work for over 2 years, and they are just lucky his wife's job is still secure. And the same [laid off] situation, for their son-in-law. It's happening all over....

My hope is this November... With elections... To put free market people back in charge.

Dear Debra, I just know that this call must have meant the world to Tom and to you. He should be proud (in the best way) that his quality of work was so recognized, and I am sure that soon things will work out for the best for you all......

God encourages just when we need it most ... i just experienced that this weekend ...His timing is so perfect ... i rejoice with you guys!

Still praying for you both. Unemployment can be fun at times...and then not so at other times..but as always God is in control and He will sustain you.

To be affirmed in the work place is one of mens greatest accomplishments. It's just like I feel when someone tells me I'm a good wife or mother.
God has your plans already in motion...oh how He shows His love daily!