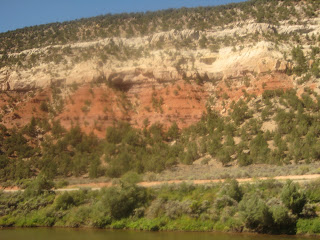 (This is my second post today. You may want to read the previous one if you missed it.)

Our roomette on the train was on the second floor and, thankfully, so was the dining room (as opposed to always climbing the tiny stairway). On our way to our first meal, I realized why hallways in trains are only around two-and-a-half feet wide. Why? Because when the train throws you sideways (as it will), the other wall is right there to stop you from completely falling down. You are only dashed side to side, from wall to wall.


In the dining car it's preferred that four sit at each table, so you realize what that means, don't you? Each meal you'll be seated with two more people with whom you've never spoken in your whole life. Tom and I loved that. Oh, the people we met! Tom even took a picture of most couples as they sat across the table from us--he told them it was our tradition (how embarrassing, I thought, but let him have his fun.) Yet they were good sports, all of them.

One couple owned a 70-acre Iowa farm and the wife said she used a regular lawn mower (as I do) for the same reason--the exercise. Yet when I told her I mow at the coolest times of day, she said so does her husband (on his tractor, the big cheater), but she preferred the hottest times of the afternoon. She spends five hours mowing and at least three weed-whacking.

I think she may have been insane.

Anyway, we found keeping the conversations going rather simple. Train people are relaxed folks, they're certainly not in a hurry to get anywhere (having chosen train travel), but rather, they're in it for the things they'll see along the way. The people they'll meet, also. And that is rather lovely.

My favorite days on the train were the two in which we spent the whole day just eating and resting, not having to pack and go anywhere, and simply gazing out the windows at scenes like these: 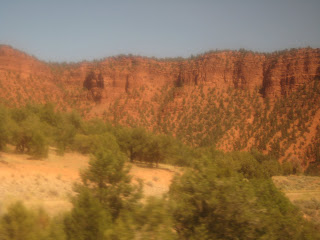 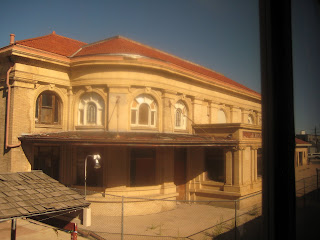 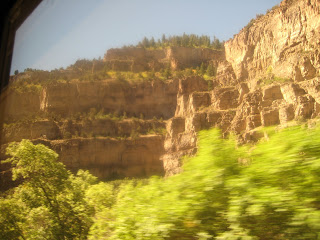 And the food! It was amazing. We all wondered how such incredible meals could be created on a train. Also, the nicest thing about buying sleeping quarters? Your meals are included in the price. Anything on the menu, even the $22 steak, was permissible to order. And of course, there was dessert following lunch and dinner. Yum.

But oh, the weight I gained. I could feeeel it.

Then there was the bunk in our roomette. Oh dear. It was Claustrophobia City up there. But I survived, just barely, sometimes crawling down and dressing at a dark 4:00 in the morning (not spending one more second up there than needed). I'd wander down to the observation car, read my Paula Deen book and wait for sunrise (and Tom). Once, I chatted with another couple for at least a half hour while we all waited for 6:30 breakfast. On the train, I talked with people and didn't even care how I looked-- often my make-up had been applied the day before. That's big for me-- not to care so much. Maybe it's because I was so often sleepless and bleary-eyed. Or maybe the train was magic.

And then the end of our journey's first leg arrived. If not for that top bunk, I'd have been sad to alight from the train (as Tom was, he who had the normal bed with a view, even), but there we were in Reno. And wow, the old part of the train station charmed us: 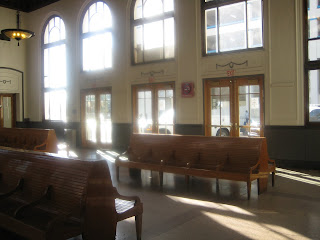 Don't you just love that? Zoomed us back to the 1920's. (Do enlarge that photo--you'll enjoy its 'glowiness'.) Here's part of the ceiling and one of the six chandeliers: 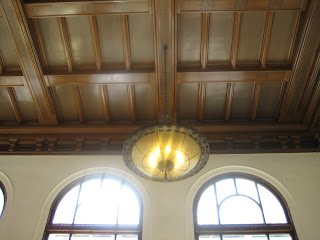 Who creates that sort of thing anymore, especially inside a train station? What a delight that it still exists for us who appreciate such things.

And then a whole new part of the adventure began. (Decorators and gardeners, hang in there. I'll have that treat I mentioned for you next time. I promise.)

Beginning to believe that I would enjoy traveling by train.
Just going from my town the 30 miles to Boston,MA the dozen or so times I've been can't compare to your experience.
Alas, hubby wouldn't be able to do it.
My dream was a cruise to Alaska and even that doesn't look possible.
So glad you did enjoy your trip while your health allowed.

Oh that was fun
It reminds me of the 18 hour train rides we had in Russia when we got the kids.
Two different trips almost three years apart.

Once in an old Victorian house I spied a door hinge - a lowly door hinge, mind you - that was so beautifully decorated I've never forgotten it.
There was no reason, absolutely no need for that hinge to be so lovely. Yet it was, because someone enjoyed doing that.
It made my day happier for having seen it. A secret thing of beauty, hidden behind a door.

Sounds like an interesting and fun trip was had.

I love old buildings. They have such charm and quality workmanship that are sadly lackly these days. :)