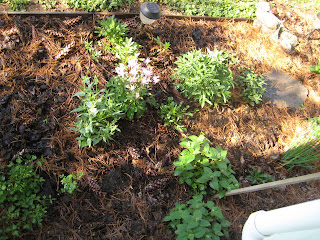 Talk about your Plan B. Or C, even.

All our snowy winter I anticipated walking out to our compost pile and beholding the lovely dirt which magically would come from all the organic stuff I threw in the compost 'corral' last summer. So finally last week I yanked up three of the removable boards, then raked and poked and pulled stuff out to see the glorious new dark, crumbly soil inside.

But what did I see instead? Pine needles. Twigs. Leaves. Pine cones. The occasional pumpkin rind. A plastic market bag (what the heck?).

Gah! Two-thirds of my compost pile was just sitting there like an un-composted, pathetic-looking lump. Ack. Fortunately the vast majority of fruit and vegetable skins had disappeared, though, which was pleasant since half-decomposed fruits and vegetables are so not pretty.

But guess what? I've become thrilled and pleased as punch with my un-composted compost pile. Why? Because I spent this weekend spreading the pine needles, pine cones,twigs and leaves down upon my flower beds as mulch, instead.

I adore the look. Not to mention the helpfulness of mulch in combating weeds. And now when I gaze upon my flower bed with all its pine droppings and leaves I'm reminded of the forests and natural sanctuaries Tom and I have visited. The Redwoods come to mind, especially when I inhale true sun-warmed pine scent as God meant it (quite unlike that ghastly pine junk in a can). 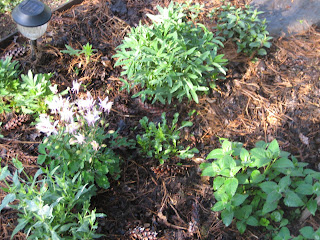 I can't wait to cover all my flower beds this way. I even searched and poked around our 'sheddingest' pine tree, found no extra needles (because I'd raked them up last month) and was disappointed. I gazed up into the tree and saw no mature pine cones and not one rusty about-to-drop pine needle. Drats.

Our other evergreen lost a few small branches (tangles with big work trucks and Bob's milk truck) and I'm--get this--considering cutting the needles from the branches with scissors--they're not the type that just fall off. Now I'm all, like, "Give me more needles or I shall die!" :) 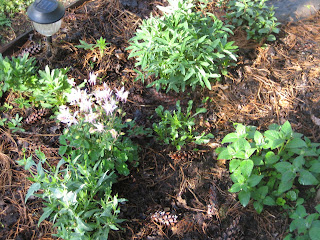 Hooray for alternate plans and for being happy anyway. That's what I say. That's how I try to live. 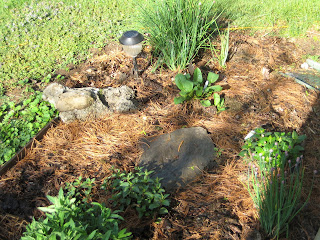 Not to fear--the very bottom of my official compost pile is lovely dirt and I do have another compost pile. It's our big weed pile behind the barn. Plus, there's the rest of the mountain of dirt, sheep droppings and straw from when the guys put in gravel in 2008--very rich, fluffy stuff, perfect for the garden, as I discovered last year.

"We did everything wrong, but it came out right." ... Elliott Merrick in Green Mountain Farm

Were you handed a lemon? Create some yummy, icy lemonade!
Posted by Debra at 8:20 AM