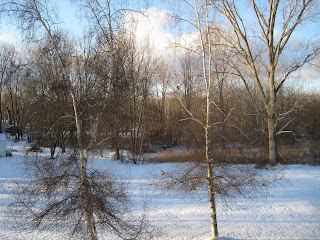 I'm back. And feeling much better. A special thanks to my Facebook friends (who also read here) for your kind thoughts and wishes and prayers. They helped, really they did, over a few rough days with this annoying cold.


Yesterday in my cold-like stupor (not from med's, for I no longer believe in them), I drove to our former town where the dentist agreed I should have my infected root canal tooth yanked from my head. That will happen on the fourth of January. Then I did some grocery shopping, also in my cold-induced fog, where I didn't even forget to buy a ton of things, as I do regularly.

But I also bought a gift card for our daughter's ex-boyfriend and I will mail it to him today. Both Tom and I wrote notes to him inside the Christmas card, and well, we'll miss Carl this week. For seven years, in some ways, he was like the son we never had and what a sweetheart he was at Christmastime--he so appreciate any little thing we gave him. It's a true pleasure to spend time with people who appreciate everything.

Hopefully, Carl won't altogether disappear from our lives now that he and Naomi are no longer a couple.


We'll celebrate Christmas on Christmas Eve, literally in the evening, with Naomi and she will spend the night, even, the first time for her inside this old farmhouse. Tom will work his usual 12-hour shift on Christmas Day, all day long. Naomi and I will watch dvd's on Christmas morning then she will return to her three cats.


And then the world will keep spinning as it is known to do.

See the photo in my header? Well, the photo in this post is that same exact scene, except it was taken today, a few weeks later. Quite the difference, huh?
Posted by Debra at 8:31 AM

Debra, I am so glad you are feeling better. And when the infected tooth is removed, I think you will feel even better,

Who could move to a place where there was only one season. The amazing changes of summer, fall, winter, spring, are such a part of the joy of life for me. And no spring is like any other spring, no day is like any other day. Everyone is a new fresh gift. We are so blessed.

Hi Debra,
So glad you are feeling better.
We too will celebrate Christmas on Christmas Eve. Jim will be working Christmas Day and the grandchildren will go to their other Grandma's Christmas Day.
Merry Christmas Friend !

Although I prefer the top picture, winter has a special beauty. I just prefer enjoying THAT particular kind of beauty from the inside.

Hope you continue to feel better!

So glad your cold is better!

Also glad you have a decision made, on your tooth.

Happy Christmas to you and to yours!

Gald you are feeling better. We are dealing w/sinus infections here. Talk about being foggy!

Enjoy your time with your daughter. Sorry your husband has to work.