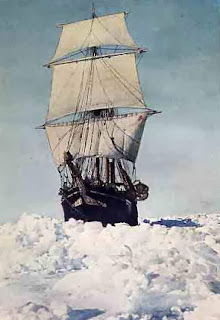 "Morale: the capacity of a group's members to maintain belief in a goal, particularly in the face of hardship. The confidence, enthusiasm, and discipline of a person or group at a particular time."

So way back in November of 2001, Tom and I watched The Endurance in a theater which proved so cold that we both clung together, shivering, by the movie's middle.

It became a memorable thing, you know, freezing while watching a movie about South Pole adventurers in 1914. Brrr...

Well, last night we saw The Endurance again, though in the toasty surroundings of our living room, and once more were inspired, especially by the part where the narrator said Ernest Shackleton realized his men's greatest enemy would be bad morale, not the actual being stuck on a sheet of ice in a lonely, frozen ocean.

Bad morale would more likely kill them all.

Shackleton recalled horror stories of ice-encased ships where crews went insane and killed one another and he determined there'd be none of that on his watch. So he gave everyone schedules and daily jobs, allowed times of fun and kept the hot food coming. When times dreadfully worsened, he watched his men like a proverbial hawk and nipped any rebellion in the bud or called for hot drinks all around if he glimpsed just one poor man straying near hopelessness.

And you know? After 2 1/2 impossible years on the ice and sea, Shackleton did exactly as he'd determined: he got every single man back home, alive. Whew.

I love that story. And while the credits rolled I determined to watch my own future morale, not letting it dip, rise, sink, dip, rise, sink, but keeping it on level ground, rather like this:


... enemies such as not getting along with people or becoming all bummed-out, cynical and hopeless like the rest of the world. Instead, I wish to be a steady light (not a blinking one) during my short decades here.

Yes, I'm aiming for a disciplined mind and good daily morale. For how horrible if I--by my lousy morale-- sank my own ship beneath the current dark rolling seas of this world-gone-wrong. 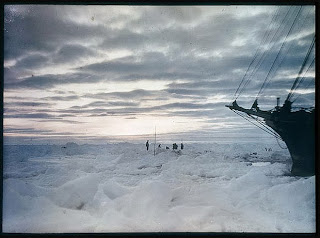 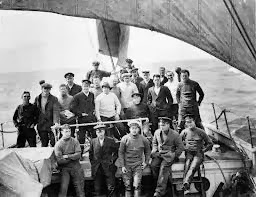 "Oh, my friend, it's not what they take away from you that counts.  It's what you do with what you have left."  ~Hubert Humphrey

"There are exactly as many special occasions in life as we choose to celebrate."  ~Robert Brault

We watched The Endurance by way of a disc through Netflix (but of course!).  :)

Interesting story. My hubby served on submarines while in the Navy...they do keep the men terribly busy...too much so in some cases...but they have good reason to do so, obviously.

I have loved that quote by Hubert Humphrey, ever since I first heard it!! It is SO true!!

Very good post Debra.Just what I needed today!I have not seen that movie,maybe I should!