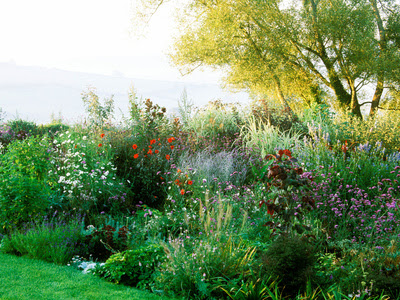 So on Wednesday I took some free Bison baseball tickets over to our neighbor, Rob, then he and I stood outside chatting while the guys finished siding our barn. I asked Rob if he could write up a list for Tom and me of classic car shows, ones along the countryside. Rob and Barbara take their own classic car to shows, like, every week, and although Tom and I aren't such rabid fans, we sometimes get weird cravings to walk amongst old cars from decades past. Rob said he'd go and make the list right away but I told him, "Oh! No, there's no hurry. Really, just whenever you think of it."

Then yesterday finally we had some cool, cloudy weather and I was determined to finish planting my garden and not waste any of my energy on mowing the lawn. So there I was weeding in the early morning silence when vroom-vroom-vroom, here comes Rob's elderly lawn pesticide guy on his death-spreading machine just three feet away from my garden. Three feet! Gah! Rob and Barbara's property line is at least 15 feet from my garden.

So the guy stops beside me, idles the engine, looks at me and says, "That's a nice garden." To which I, tight-lipped replied, "Thank-you." And if he hadn't left the engine idling I would have added, "Please! Could you stay on the other side of the telephone pole over there? That's the property line." But I have a soft voice and I generally refuse to yell over machinery since it's quite unladylike. So I said nothing and continued pulling weeds and he moved on, leaving those death granules everywhere.

Then, not wishing to inhale insecticides, I practically ran back inside the house, fuming (but telling myself to calm down) and yanked down every window which had previously been welcoming fresh air, but now I wanted to protect Lennon and McCartney and myself from inhaling the stuff within our own walls. And for an hour I sat inside the house waiting for pesticide fumes outside to magically waft away (as if). And making plans.

Then after that hour, I returned outside (trying not to inhale), this time to our Bunny Pasture where I yanked the weeds in the raised bed I'd made out there, then using my wheelbarrow and shovel, I transferred more dirt to the bed (is anything more exhausting than moving dirt around?). Then I grabbed my buckets, returned to my main garden and dug-up my lettuce and tomatoes (some of them) and transplanted them into the raised bed since it's farther away from our property line and the poisoned lawn where the insecticides are now running through the ground into my garden. And our grapevines. And our orchard trees.

Later I pulled-up the weeds in the other raised bed I have out there, but was too tired by then to add much-needed additional dirt. Maybe I can do that today.

And all along, God kept calming me down. Or trying. He kept reminding me not to create anything in anger, for then there will be no enjoyment before or after the work. And how the way we treat people is just about the most important thing on this Earth. Then when I tried whining to Him about how I can't handle all this, He told me, "Yes, you can, Debra. I'll enable you. Do things my way and it will all get done eventually, inch by inch."

Well, I'll need Him to help me big-time. Now I must add more raised beds to the Bunny Pasture and replant my huge main garden with flowers (since we don't eat those). All that moving around of dirt! All that digging, arranging, planting and replanting...

And when I wanted to get red-eyed angry with Rob for poisoning his acre+ lawn three or four times yearly, here he came walking toward me, holding the handmade list of the car shows. It was sweet of him to make us that list so soon--Rob is always helpful like that. He's one of our neighbors who snow blows our driveway for us and mows part of our lawn and--well, all that other kind, country neighbor sort of stuff.

After that kindness, I did calm down. And I just felt deflated and bad for this poor old world where people feel they must have perfect green lawns and for ignorance and disappearing bee colonies and people with cancer and elderly men who ride around on machines spreading insect poison while wearing no face masks.

And so Life goes. At least for awhile longer.

"The Earth is the Lord's and the fulness thereof."
Posted by Debra at 6:10 AM

I'm right there with you Debra. And I have nothing to say but I'm sorry this happened on your beautiful work day morning.
((Hugs))

Oh Girl
I am so sad that the earth near and about you got a dose of "death".
It is so hard to keep wild things wild and untamed. It is good that the heart stay that a way and not "tamed" smirk into bitterness like the masses. It is good to resisted such temptations. Nothing wrong with asking nice however.

A story that shows discouraging and positive things but also shows how complex life can be, in small things.

My niece used to tell me about a painter in the factory where she was an engineer. He refused to wear his face mask because he said, "it just gets all clogged up every fifteen minutes and I have to change it." Wow, some people don't get the point of what's going on.