Helping. That's What It's All About. 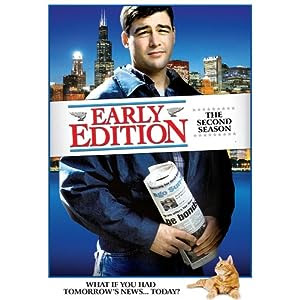 Did you used to watch the tv drama, Early Edition?

I loved that show, still do, still often watch my dvd's and ancient, thinning videos taped from the tv.

In case you've not seen it, Gary would get tomorrow's newspaper today and so he'd have to go racing around Chicago trying to keep people from accidents/decisions which would hurt or even kill them. In his daily newspaper were all the details he needed to know in order to arrive in time to 'save the day.'

Doesn't sound too difficult does it? Just show up and warn people that they're making unwise mistakes, they're in danger, they're headed for a big fall.

Huh. But you know how people/we are, don't you? We don't want to be told what to do. We distrust strangers who come along with warnings, wanting us to change what we think best. And we must know all the whys. Why do you think I'm making a mistake? Why should I change? Why do you think you have a right to tell me what to do?

And it's not like Gary could tell everyone, "Hey. I get tomorrow's newspaper today so you'll just have to trust me." (Like that would work.) No, mostly? Folks had to humble themselves and trust that Gary knew something they didn't. They had to act in a type of faith and rethink their decisions.

Not everyone did that, though. And mostly, Gary was misunderstood, always in a hurry, always sacrificing his own life, his wants and he received oh-so-few thanks.

Anyway, Early Edition confirmed what God was teaching me about ministry to others at that time. Even now it reminds me to not give up on others as I try to help them, especially at this blog.

Ministry to others can get messy, you know.

And I'll just end this with a quote from the show. Gary's counterpart, a man who received tomorrow's newspaper in New York City, traveled to Chicago to find Gary after he (NYC guy) had not received the NYC paper for a couple weeks.

Joey Clams appeared to want to help Gary not lose his own newspaper, but in reality, he hoped that, by helping Gary save other people, he'd start receiving his own New York City newspaper again. He missed the fringe benefits (betting on sure-bet horse races to win tons of money, being one), but beneath all that, he also missed the looks of gratitude he received from the people whose lives he saved. He missed making a difference.

Well, Joey never did get the NYC newspaper back and near the episode's end this is what he told Gary:

"But you know? I got to thinking. I've been making too much of this paper thing. See, Joey Clams is not a passive spectator on the stage of History. No, my friend. He's a man of action. And if I want to help people, who's gonna stop me? No one, that's who. I don't need the paper to do that."

Wow. Anytime, we can help people. No great, super, behind-the-pulpit callings or gifts needed! No, just a longing to lift people up who are down, a wanting for them to know our amazing Saviour.

Update 2019: Finally the complete 4-seasons of Early Edition have been released on dvd!

What a great post. I watched some episodes of the program but never really thought about what it could mean.

Would I warn someone if I knew something terrible was going to happen to them? I'd like to think I would but then I think that millions are facing an eternity without Christ and I wonder if I'm doing enough to warn them.

Some will not listen but I still need to be warning them.