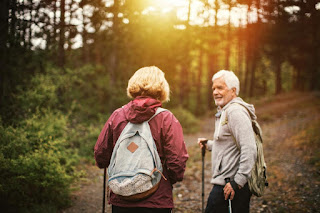 Forgot to tell you something.

Namely, my mom has a boyfriend.

Now, don't get all wild-eyed--if you've not been reading here long you may not realize that my dad passed away in 2007. So, well, it's ok. I mean, about my mother having a boyfriend.

Even though she's practically a cradle robber. She's 72 and he's something like 64. heh.

She says he's totally different than my dad, but then, she didn't need to tell me that. I guessed it from her previous stories of how, each week, they walk miles together and lately they've been going out target shooting--with real live guns, even. And well, I don't recall my dad ever walking for exercise nor shooting a gun. Alas.

I'm happy for my mom, as are my sister and brother. We're not the type to discourage our mother from a new relationship--I've never understood all those movies and tv shows which center around selfish adult children who absolutely refuse to accept a parent's new love. How many times have I grumbled at those kinds of shows, murmuring, "Aw, just grow up! Sheesh."

My mom was always dependent upon my dad (never even had a driver's licence), you know, one of those women who say, "Phooey to independence! I just want to be an old-fashioned wife who centers her life around keeping her man happy."

And well, I'm all for having a happy husband, but give me my independence, too. And give me some things which are just mine. A separate life on the outside and on the inside, too, places where I can be busy and happy and vital apart from my marriage. Me and God, together, passionate, changing this big old world type of stuff. And contented, peaceful, whether I've got a man in the next room--or not. Just always finding my greatest joy in Jesus.

Aw heck, you certainly know by now how I feel about that.

But again, I'm very happy for my mom as she's out discovering a whole new life. She's found a man who enjoys thinking up new adventures for her, and at this stage in the game, that's a pretty special thing, indeed. It sounds like she's discovered exactly what she needed--and because I love her--I am thrilled for her.
Posted by Debra at 2:58 PM

Oh how wonnnnnnnnderful, for her!!!!

And super that her kids are wise enough, to be happy for her.

I also think it's great that she has found happiness after her grief. My mom assisted my Dad in the family country store until Dad died in 1974. She also had never gotten a drivers license or had a job so she had to really adjust but did that very well. She never acted like she wanted a boy friend and was happy to just visit me and my two sisters. Your mother is really lucky to not only have a boy friend but trying new things as well.
Odie

Your mom has been alone quite a few years already...but before being hasty to not understand how hard it is to accept and be happy for a parent remarrying...let me tell you my hubby's dad remarried within about 8 months...but more than that was the total insensitivity to how his children felt about their mother. These 2 could not keep their hands off each other (when my in-laws virtually NEVER touched) and were constantly going about saying "love is better the 2nd time around". The honeymoon was oh so short...within a year they were both miserable...which the family had no part of causing...she was in the beginning of Alzheimers when they married. (When you are older that is a risk one takes). I found her way nicer to be around than my hubby's mom was, for she loved me and our children. But I felt for my hubby too who had not even begun to finish grieving...and then had more to absorb. But to his credit, I doubt any of that ever showed to his dad and his new wife. And I would not have been happy had my dad remarried either because my mom lived in hell...and though no woman should have had that to live in, still seeing him treating another woman better, would have increased the grief we children felt for our lovely mother. Experience is a great teacher. Situations within families are so different...sometimes there is no way to be truly happy over an event. (My dad was a master at creating such things all throughout his life). We found out when he had a massive stroke and died, that indeed he did have a girlfriend he was going to marry, or so it was told to us. I suppose GOD took him before he could bring more pain to his children. Of course, I did not wish him dead, rather I wished him changed. But some wishes do not come true...in this life.