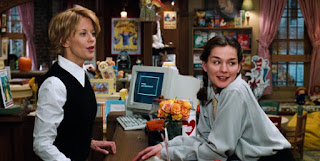 In the movie, You've Got Mail, there's this:

"George, are you online?"

" No. For me the Internet is just yet another way of being rejected by women."


Ha! I love that and often think of that line, also. Why? Because through Facebook, Classmates.com and email I've contacted old friends from jr. high, high school and my young, married days.

I ask questions about their current lives and they write exciting descriptions of their years and those of their grown (brilliant, blessed) children. Then I tell them about my simple/farmgirl/homebody life and my waitress/drummer daughter and--often-- I never hear back from them.

And then comes that bothersome sting of rejection.

Heh. And many are the times I've told myself, "Duh! No wonder we lost contact ages ago. All we had in common was that we attended the same high school or church or lived in the same neighborhood or had babies at the same time." And though some folks can re-build a whole, vital relationship on that stuff, usually I cannot.

So here's what I've learned: Having nothing in common is not the same as rejection--it's more a lacking of ability to connect.

Not all friendships were meant to last forever! Some served their purpose only for a season. People change. I change. We all travel in different directions and only some of us will meet up in a new place, still able to connect and build something lasting.

But that is the exception, not the rule.

And if the people of our past don't appreciate the new us, well, that should hold no shock. In a way, our past is a sort of Tower of Babel where God says, "Go out! Grow-up and become a new creation in new places with new people and form the Life I created you to live."

And if down that Road of Life we reunite with some old friends and form godly connections with them? Terrific. But if we meet some with whom we have nothing left to discuss, well, that's ok, too. We each must travel where God leads and He makes all things new, especially dynamics in relationships.

And there are always new ones to be found.

Sometimes it's not me. It's not them. It's just Life.

You are so right Debra. People and relationships do change.Although that is sad.I like to think of it as beginning new chapters in my life.

I find that true of even family members that as a child I had everything in common with. We still love one another, but sometimes have nothing in common except our ancestory. Sometimes that makes me sad, but as long as the love remains..it's ok.

Boy, do I ever 'get' you about the facebook thing. I look to see who'se posted, then look to see all the comments they get back, and I get nuthin'...and I feel rejected, unpopular. I'm in 6th grade all over again!!
Thanks for putting it all in perspective (once again!!) ;-)
You are a terrific writer!
Joyce Maynard would be proud!
Love ya!
Myrn

I sometimes feel guilty for not catching up with friends as often as I'd like but I need to realise that sometimes friendships are for a season. If remained close with everyone we ever called frined we would have no time for ourselves and for those closest to us.

Echoes From the Hill said...

connecting with people from the past or newley met online is always a gamble. I have met and lost track of more than one person on line. Never having met them before and it was as painful as a friend I have had "in real life" one in particular was to death, and I grievd as if she were living next door to me. As in day to day friendships, it's the same on line. What connects us, is what we have in commmon. We can try to bring up mutual past experiences and if they don't bite then hey, we tried etc. As has been said maybe that's why we lost touch in the beginning so long ago. We all have lives that take our time, weaving the fabric of who we are now. Combined with who we were is always interesting. Maybe some people just don't realize that we all change, grow, and yet keep the essence of what we were.

Debra~ "Sometimes it's not me. It's not them. It's just Life." What a great thought! I really like this post. It is so true. Thanks for sharing.
Lisa in Texas = )