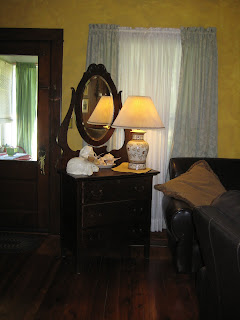 On Friday we went to three estate sales, maybe four. I don't know, it was all a blur.

Good grief. Whole crowds of people were crammed into rooms made for only 5 and well, crowds make me nervous and cranky. And instead of the usual spirit of possibly making a fun discovery, the vibes I felt from people were more like desperation. As though this economy has turned folks who would rather have died than go to yard sales into people who must shop them.

People, people everywhere, standing in front of every box and shelf, making it impossible to peek around them. And all these hundreds of people were (it felt like to me, again) searching for that one treasure as they'd seen on American Pickers (and all those other cable tv shows) which the professionals hadn't recognized as valuable. The treasure which was probably gone hours before, just after the doors opened.

Bleh. I vowed to, for the rest of this year, just go along for the rides with Tom and then whip out my thermos of coffee, my books and the occasional cookie Tom gets when he buys gas. Then camp cozily in the car while he faces those milling, inside-your-personal-space crowds. Tom can so tune into stuff that he tunes out all the people.

But then came Saturday. heh.

Well, I didn't break my promise too much, for this estate sale was inside a large garage-type warehouse out in the country (not the burbs where the others had been) and there was plenty of room for the personal space of the twenty or so of us there.

So I walked with Tom inside, he disappeared in an opposite direction and that's when I saw it. Oh wow, that dresser, above, just stole my heart, something which hasn't happened in a very long time. I fell in love while still remaining detached though, for they were asking $50 and people without paying jobs (and an already-crowded house) do not need $50 dressers, no matter how much they love them. So I walked back out to the car to my coffee and my book. And well, to more thoughts about that dresser. ("Hmm.... I could put it there, no not there, but maybe there, instead...")

Tom returned, told me he'd finally, after two years, found the perfect workbench for his garage at a decent price so he used his 'tractor money' (profits) to buy it. Two sets of shelves, too. He'd told the people he'd return later with his trailer to pick them up.

So speeding this along, we came home, ate lunch while watching a movie, then Tom hooked up the trailer and left while I ambled out to the garage to create room for the new workbench. Of course, in order to do that, I had to roll out fifteen garage-type-paraphernalia things to the patio and I spent over an hour organizing, shoving things around, getting greasy fingers and putting things into drawers. A real labor of love, trust me.

Tom eventually arrived home, backed the trailer up to the garage and that's when I saw it again: my love-at-first-sight dresser, there amongst the workbench and shelves. I had to look three times to be certain. I'd described the dresser to Tom earlier so he knew the one I wanted and they included it for $25 in a package deal.

Wow. Tom was thrilled that I'd organized his garage for him and I was thrilled that he'd used his tractor money to buy the dresser for me, that he'd heard the yearning in my voice in amongst my sighs of, "But it was $50 and we don't need it that badly."

And so yesterday our marriage felt especially sweet, more than usual, because we both gave what the other person wanted--and thus reaped something special for ourselves. 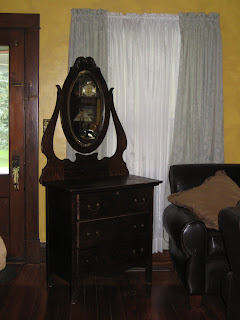 NancyR asked if the mirror is beveled and yes, it is.

What a cool find!

Don't you just love it when a plan comes together? What a lovely story with the best ending. Praise God for your awesome saturday.
Odie

What a great mirror and harp on that dresser! Is that a beveled mirror? If so that is a big plus!
How nice that you both got something you really loved and that he surprised you.
nancyr

I LOVE this story! It just made me smile and feel all's right with at least one little part of the world where people are doing kind and loving things for one another.

The dresser is very appealing, and I love the reflection in the mirror too. And I'm looking forward to the picture of Tom's workbench and shelves.

What a great post and that's a very nice dresses.
I love it when Bob and I jive on things like this. Since he's unemployed and I'm working our life has sort of reversed. It seems to be working well.

Oh that is so sweet how the heart is met. He knows our hearts desire. Tom is a sweet heart as are you.
I can just see you smiling.

That is so sweet! I love the dresser too!