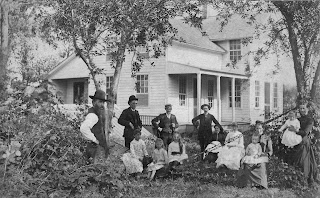 "Each of you should use whatever gift you have received to serve others, as faithful stewards of God’s grace in its various forms. If anyone speaks, they should do so as one who speaks the very words of God. If anyone serves, they should do so with the strength God provides, so that in all things God may be praised through Jesus Christ."   ---1 Peter 4:10,11
******

The books I showed you last time in a photo? Most were written by Ralph Moody and oh my! He came from the 'writingest' family.
Ralph's Uncle Frank wrote a book.
Ralph's cousin, John, wrote many books. (Here.)
Ralph's other cousin, Frank Jr., was a newspaper editor and wrote two books (here and here).
Ralph's grandmother wrote a book.
Ralph's Uncle Ralph (yes, that's correct) wrote 3 books.
Ralph, himself, wrote 17 books.
And I'll mention here that Ralph's mother's family tended to live 'forever'. Wow. Eighty-two to one-hundred-two, pretty common for them all. And these were folks born in the 1800's!
Anyway.
In Ralph's autobiographical Little Britches series, his widowed mother, Mary Emma, moved her 6 children to Medford, Mass in 1912 and that's where we meet Uncle Levi, her uncle.
After Ralph's family finds a house to rent, Uncle Levi treats 13 year old Ralph and his older sister, Grace, to a meal at a fancy Boston restaurant, a first for them both. Afterward Levi told them:
"Don't never thank me for victuals! If there is anything in this world I like to see better'n a parcel of little shavers sittin' up to table and stuffin' their bellies, I don't know what it is."
The next weekend Levi arrived with a brand new tobaggon and tons of groceries for a housewarming:
"... it looked as though he'd bought out half the stores in Boston. There were two big bags of fruit, every sort of vegetable, a turkey that weighed nearly as much as Elizabeth, a two-gallon jug and a dozen packages ..."
He rounds up Mary Emma's brother, Frank, (and his family) and while the women cook the meal, Levi, Frank and Ralph build tables and shelves in the basement for what will be Mary Emma and Grace's fine-laundry business so to support the family.
Then after the family sat eating and visiting at the table for 3 hours, Uncle Levi announced:
"There, by hub! I calc'late a family ought to move about onct a year, so's to get in plenty o' housewarmins whilst the children is all together."
At that chapter's end, always, I set the book down and let Uncle Levi's generous spirit convict me to become more giving.
Well, before preparing lunch yesterday, I finally read A Maine Man In The Making, 'Uncle Frank's' book. Eagerly I devoured the chapter titled, Uncle Levi, and enjoyed more stories of his later years and more giving to children and neighbors. But oh dear, the ending. Uncle Levi at age 83:
"One day John drove Uncle Levi down to the barber shop for a shave. When he had been shaved he went into the market and filled his arms with bags of fruit for the children. He then hurried across the street to the car, but his heart was unequal to the task; he fell dead among the broken bags of oranges and grapefruit.
Quietly I closed the book, stepped into the kitchen to heat a pan on the stove, but found myself brushing away tears. "Debra!" I whispered. "Pull yourself together. Sheesh." Yet moments later, new tears came.
I kept thinking of this and want to hold onto it:  if there's a sweeter way to die than while happily doing what God placed you here to do, well, I don't know what it is.
Uncle Levi wrote no books, but all these decades later his generous spirit still nudges me--and I hope you, as well--to help others in the specific ways God designed us to.
And we can do that, all of it, even in 2021. It's more necessary than ever that we each play the part for which we were designed. 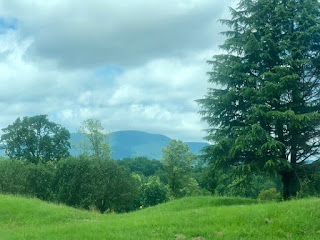 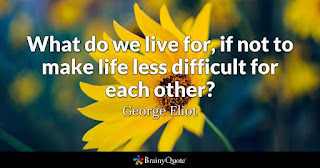 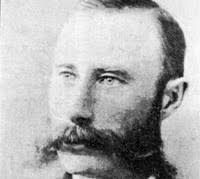 And here is the final paragraph of Frank's Uncle Levi chapter:
"We laid him beside his mother, among the pines on the hill back of the old farm, and nephews and nieces, even to the third generation, have vied with each other keeping his grave "neat and nice" as he always insisted on having everything. If the supply of nieces and nephews should ever run out, we can safely trust his memory to Him whose initial (G) Uncle Levi wore on his watch charm for sixty years."
Last week I was so excited to find this photo of Ralph Moody's mother and siblings from later years: 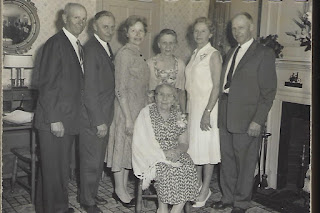 To check out more photos and the birth and death dates of the family, etc., go here.
My favorite books of Ralph's about his family are these, in their historical order:
Little Britches
Man of the Family
Mary Emma and Company  (This one? I've probably read it 20 times.)
The Fields of Home
(OpenLibrary.org may have some of these.)
Oh! And last week I began a Pinterest page regarding Ralph Moody and his books and family. Here's what I have so far.
****** 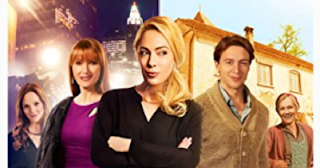 Tom and I discovered another cool movie: Love By Design.  (I kept thinking of many of you who would love this film.)  シ
Please remember: My posts are ALWAYS about more than they appear to be.
***
"For if you forgive others their trespasses, your heavenly Father will also forgive you, but if you do not forgive others their trespasses, neither will your Father forgive your trespasses." ... Matthew 6:14,15
Posted by Debra at 11:10 AM

I can understand how reading about how Uncle Levi died, serving others with his food gifts, brought you to tears. I will look for the movie you suggest. I told the ladies in Bible study last week that I believe there is some urgency in forgiveness, since we do not know when we will be called home, and Jesus commands us to forgive.

Oh Debra I have such a warm spot in my heart for Little Britches. It was my youngest son's first and favorite "chapter book." I read that to him sooo many times from when he was about 4 to 8. He graduates from college on the 13th and I will be getting him a copy for graduation with a little surprise inside : ). I didn't even know about the other books! Can't wait to read them. Oh what a way to go out!

Yes, Debra there is always more to your posts than appears ! Love them !

Thank you for telling us about Uncle Levi. I want to find some of those books. My gifts are few, but I do love knitting for others. I've found a school near our new home that can really use the mittens I knit every year. There are also two nursing homes within 2 miles that can use the lapghans and wheelchair blankets I make.
Wishing you a wonderful day my friend. I'm not sure if you read my blog much but last night I posted photos of our new house with the curtains I put up.
Maybe you can give me some decorating hints. :-)
Blessings and hugs,
Betsy

This is such a heartwarming post. What a great man Uncle Levi was, and his love and generosity has helped change the world. I haven't read these books, but I think it's time to check them out!

Thank you for this extra info on Ralph Moody and his family. I first read his series four years ago shortly after my beloved niece was killed in a car crash. Moody's writing is wonderful, and the books helped heal my broken heart. I shall eagerly look for his relative's books!

Terra--yes! So true about forgiveness. Our life will never be what it was meant to as long as we hold onto unforgiveness. Let me know if you get a chance to watch that movie, ok? :)

Angela--oh! Congratulations to you and your son on his upcoming graduation. That's wonderful that you've read the first book so often and I do hope you can get a hold of the others. Amazingly they were all reprinted a few years ago--hooray! If any series deserves that, Ralph's truly does.

Unknown--thanks so much for your kind words and for reading here!

Betsy--oh! I think you'd really enjoy these books. Ralph wrote so honestly and also, just reading about those early days of the 1900's feels great right about now after all that's happened. I'll check out your blog today, but I'm sure your rooms look just perfect the way they are!

Pam--I also hope you'll look into these books! I know you'll like them. I can't recall when I first found them, but I'm thinking it was right after we moved here to New York. Those that I listed are my favorites.

Carrie--oh dear, I'm so sorry to hear about your neice. That must have been incredibly hard to accept. But I truly understand how Ralph's books could help in a time like that. I've often considered his books to be comfort books. I finished reading his Uncle Frank's book and so far that one is my favorite (A Maine Man In The Making).

Thanks so much, Everyone! Blessings, Debra