Oh My. Tuesday and Wednesday. 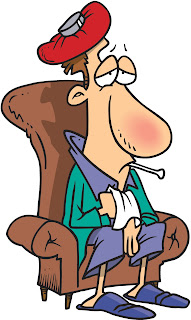 "But overhearing what they said, Jesus said to the ruler of the synagogue, 'Do not fear, only believe.'  ...Mark 5:36


Eegads. Tom awoke on Tuesday morning having not slept and feeling weird pains which he described to me.

I said, "Ugh! That sounds like a urinary tract infection," to which he replied, "I think it started on Friday."

"Friday? Why didn't you tell me? (Normally he lists his pains to me in minute detail. er hem.) "You can't play around with U.T.I.'s! Good grief."

I made breakfast, sent him back to bed. Hours later he burst from the door, shivering like a washing machine in spin cycle and making sounds reminiscent of dying soldiers on his war videos.

Great. Now he's got a fever.

Well, I doused him again with the cranberry regimen, raced around opening heating vents, (pulling clear tape from some), then ran the main heater full blast, first time this season (after changing the filter which I'd procrastinated, of course).

I laid hands on him and prayed, then also prayed in the kitchen for any spirits of sickness to leave our house because Sam The Cat also chose this time to throw up. Hugely. On the white carpet in our office.

Color me rejoicing over that revival weekend I told you about. Something I love about God? He knows the future--and how best to prepare me for it.

Really, I needed that extra boost of spiritual encouragement, especially later that night when satan whispered in the dark, "You should seriously worry, you know."

Anyway, after the fever left, Tom called the doctor and made an appointment for Wednesday afternoon. Every four (or so) hours I made him take the pill/juice regimen, watching him closely to make certain he wasn't worsening.

And Tuesday late afternoon? I stepped outside to get the mail just as two teenage girls walked past, one of them singing a lovely song. Wow. The song remained with me for an hour and I thanked God for such a special gift.

Next day in the kitchen after seeing the doctor (who, after Tom mentioned having chills said, "Wow, you were sicker than we thought!") he showed me his little bottle of antibiotics. But yeah, I still made him drink more cranberry juice.  ツ

This morning before he drove away to work Tom said he's feeling much better.

Whew. Color me so grateful for, well, everything.

Perhaps not until we reach Heaven will we truly understand what a miracle every single day was, but me? I'm going to try, even now while still upon this God-created planet Earth. 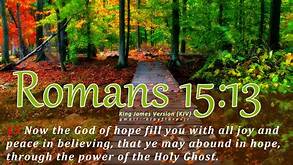 Oh, and I forgot to mention Tom ached all over because he'd returned to working out and was bent like a very old man. In pain. Oh, and he had a 3-day sinus headache, but he didn't tell me that till it was over. All this made it scarier.

A normal day! A normal Autumn day, even. How I love these returns to my normal. 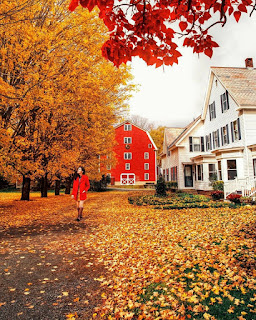 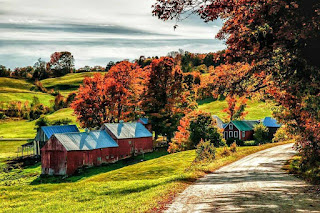 
My neighbor, Sue, cracks me up! Here's what she posted yesterday at Facebook--

Chills, challenges, change of seasons... Thankful you are meeting them and overcoming!

Oh my ! What a scary thing for you and Tom. I'm so glad that that your first thought was to pray. I'm also glad that he went to the doctor, (who by the way, seems to have confirmed YOUR diagnoses), to get it completely taken care of. When I'm sick or hurt I usually just go on and figure it wil resolve soon. When Dennis is sick or hurt, I have panic attacks. Seriously. I'm such a worrier.
I bought "Encountering Heaven and the Afterlife: True Stories from people who have glimpsed the world beyond," for my Kindle. To say I'm fascinated by it would be an understatement. It's like reading about MY people who have experienced a similar event and would understand and not think I'm crazy. Thank you so much Debra. I'm forcing myself to just read one story and put it down so I can absorb the event and the implications of what I just read. I do know that I often say I am not afraid to die, it's a beautiful eternal life waiting for us believers, but I AM afraid of the process of dying and the pain that could be involved. I don't like pain.
Thanks again for the recommendation. I'm also looking for the television show you mentioned but no luck there yet.
Blessings,
Betsy

Wow! You guys sure went through a rough patch! Debra, your attitude was so admirable when you said you were thankful for the revival that prepped you for the past few days. My scripture verses for this morning were in Luke 12, where it reminds us to consider the lilies of the field and the birds of the air, and how the Father takes care of ALL of us. Even though we know He is with us, always, pain and suffering can make our faith wobble a bit. I guess He allows us to be reminded, often, of just how dependent we are upon Him. Hoping and praying you and Tom have a great weekend! Praying for Naomi, too.

This is very interesting, You're a very skilled blogger.
I have joined your rss feed and look forward to seeking more
of your fantastic post. Also, I've shared your site in my social networks!

Thanks so much, Everyone! Tom had a bit of a set-back on Sunday, especially with the sinus problems, but now he's improving again and back at work. Please pray that he'll continue to accept some changes he'll need to make for the future. I've been there, am there, and am still learning the necessity of accepting change! Thanks again so much...... Debra