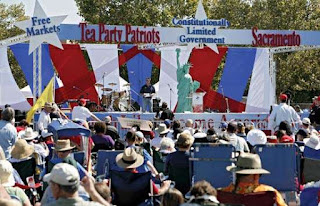 Many of us are still reeling from what happened in Tucson, Arizona yesterday, the shooting of Congresswoman Gabrielle Giffords, her staff and other innocent people.

Chalk-up another horrible day of history for our Country--the ugly list continues growing.

I've told you before that I am a reader of message boards and well, yesterday they were far bloodier than usual. Oh, the ravaging flames directed toward Sarah Palin and her Tea Party groups!

And even though I'm no huge fan of Ms. Palin nor Tea Party Politics I was tempted, at first, to defend them, to insist they had nothing to do with the mentally disturbed young man who killed/wounded all those people. But the more I read that Gabrielle Giffords was one of the politicians put into the crosshairs of that Tea Party chart, well, I am horrified.

All the Tea Party gun rhetoric of past months! I'd not paid much attention (again, not being a fan and only respecting their right to gather and speak their minds), but snips and pieces come to mind (I recall the "Reload!" thing made me gasp!) and now return in print to haunt us all. And everyone is paying a price --the battle in our Nation is again raging and the smoke is heavy over our land.

Our words--oh, they are powerful.

And although I'm not saying that the gun rhetoric of the Tea Party even nudged this confused man to shoot into that crowd, I am saying that all the gun-speak has taken a serious toll and backfired and returned to haunt, vilify and condemn much of the Republican Party.

No man can tame the tongue--only God can. And I believe He works with us and works with us to yank out the ugliness which causes us to speak foolish, hateful words and ones of separation. For it goes deeper than just teaching the tongue to keep quiet. What God wants is to remove the sin which sets our tongues aflame, to speaking unedifying, damaging words in the first place.

And today that's what I'm asking God to do in me--a deeper cleansing work.

And now, because of what has happened in our Country, I believe a responsibility lies upon us as Christians to speak with twice as much compassion and wisdom as before. No, we cannot make up for this latest tragedy, but we can use our tongues to aid in healing our Country through the power of the words only God can give us.

Not our words, but His. Not our (political, emotional, selfish) will, but His, be done.

Originally I used a Huffington Post article for the Tea Party chart, but that added some unforeseen problems, so I switched to the TCM article which I feel is a better representation anyway.

I would not trust the Huffington Post for my information. They HATE conservatives and specifically Sarah Palin. I am curious to know if that chart is on any of Palin's sites.

Anon--that chart is *everywhere* on the Internet and has been for months. I've seen it on many sites. But I also read that it was taken down yesterday from Sarah Palin's site. If that is true, if it was just removed without any accompanying explanation, I find that sad. For myself, if I had published something similar on my blog, I would have stated *why* I removed it. I believe it's important to explain ones actions. But oh well, that's just me.

Debra, you are so right. Words are powerful and it can be like sowing the wind and reaping the whirlwind.

"Blessed are the Peacemakers."

(And on a funny non sequitor note here, Paul was always a peacemaker and I had this put on his gravestone, but I felt a little odd about it because it is a stone with both our names on it. But the woman who was writing this out at the memorial company replied to me, saying, "Well, I never read that it says, 'Blessed is the Peacemaker and his wife'". )

Debra this was an eye opening post and I thank you for your research and wisdom. We need more like you out there keeping us in line and in focus to how we should be to stay closer to God and live better lives. You are so appreciated.
Odie

Dear One, yes it was/is a horror! An unbelievable horror!

Why not the old fashioned way? Why not state facts, and have the perpetrator stand up to the responsibility?

Just my view, for your consideration. Please and thank you.

Kristi--That whirlwind quote is perfect! (Loved your story, too). :)

Aunt Amelia--Just wanted to make sure you saw these lines of mine:

"And although I'm not saying that the gun rhetoric of the Tea Party even nudged this confused man to shoot into that crowd, I am saying that all the gun-speak has taken a serious toll and backfired and returned to haunt and vilify and condemn much of the Republican Party."

I believe it's just a fact that because of the earlier gun rhetoric we Republicans are now being targeted as gun-toting extremists.

Yes, blaming is not ok (in earlier posts I've written that blaming just keeps us immature). But in this case, with the words which were spoken in March and beyond, there is the "reaping what has been sown" principle happening. And now the Tea Party and Sarah Palin--and the rest of us Republicans--are reaping some horrible blame because of unwise words.

It sounds like the shooter was seriously mentally ill.
We can't blame one political doctrine or another. There is more than enough hate on both sides.

Allegedly, the young man who killed and maimed so many, was a fan on the Communist Manifesto and blamed Jewish people for much of the country's ills. Gabrielle Giffords is Jewish. She was the target. The 22 year old is a sick young man. It is not the fault of the Tea Party, or The Republicans or Democrats. It is sad that so many people have hate and malice in their hearts.
This situation should not be politicized. I'm sure people of all political persuasions are devastated by the senseless violence. Jarod Loughner should have been in the mental health system years ago. It sounds like he might be paranoid schizophrenic. This mental illness typically develops in young adults.
The question that is foremost in my mind, is why this young man was sold a semi-automatic gun when he had a history of bizarre behavior. This was known to the police, to the collage he attended, and surely to his parents.
nancyr

But here's something that came to me earlier today: What if the Tea Party's slogan had been something like, "We want to do the hard thing. We want to work together with those who can make a difference and find our common ground." (And then seriously tried.)

Again, *something* like that. If that had happened, then most likely, only the extremists would have dragged the Tea Party into this latest tragedy. But as it stands now, (again going by the message boards), the *normal* people, the liberals and Dem's are citing the ill-chosen words of Sarah Palin (etc.) and linking them to this tragedy.

What if there had been no legitimate link? That is what I'm asking myself. And to tell you the truth, I am all about doing whatever I can, personally, not to destroy my credibility. It's so easy to do that nowadays so I tend to be overly careful not to be, well, stupid.

Maybe that sounds like a different me than I usually am at this blog, but this whole ordeal has me riled up. :)

I do believe words are powerful...but I don't agree about the politics of this, tea-party, or republican or media or other-wise.

Dapoppins--those are all great questions!

My point was that the whole gun rhetoric of the Tea Party was a huge mistake and has backfired and caused a horrendous backlash. If (as I stated above) the Tea Party's agenda had been the opposite-- if it had been all about working with those politicians on the chart in a spirit of comaradarie and selflessness, then no one (relatively) would have immediately pointed to the Tea Party as possible instigators of this tragedy (which, no, they weren't).

And alas, since I seem to be repeating myself, I'm thinking it's time to close these comments. :)

Thanks, Everyone, for your thoughts and may we all do our best to guard our tongues and therefore avoid unnecessary consequences we never, ever meant to happen because of our words. Blessings, Debra